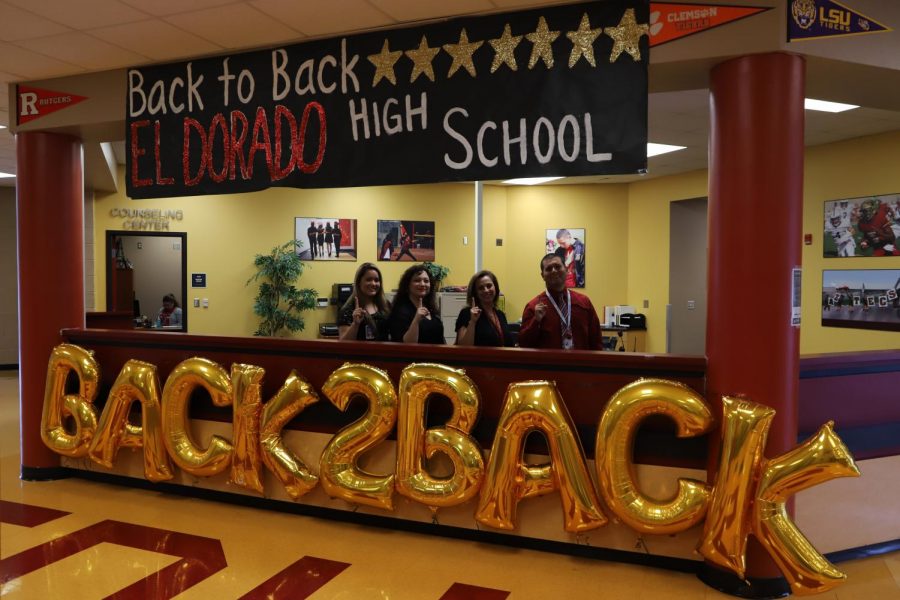 El Dorado was awarded seven out of seven distinctions by the Texas Education Agency for the second year in a row Aug. 15. El Dorado remains the only secondary school that has met all seven achievements in SISD. The campus maintained their B rating, but increased from a number score of 83 to 88 from one year to the next.

“What this award means is that our campus is thriving in all core and advanced courses as well as graduation rate, and I’m proud of our scholars and teachers for demonstrating this behavior,” Principal Vanessa Betancourt said.

The celebration took place on Thursday morning in the theater, where Betancourt and administration announced the victory. Student Council members played a crucial role in setting up the celebration for the Empire to witness. Initially announced as an emergency meeting, the celebration left the faculty and staff feeling accomplished.

“I honestly thought somebody had passed away or something bad had happened when they said it was an emergency meeting,” said Graphic Design Teacher and Yearbook Instructor Vanessa Martinez. “I was shocked and happily surprised when I walked in and shared the excitement with my fellow coworkers.”

There are three components in which the distinctions are measured: Student Achievement, School Progress, and Closing the Gaps. El Dorado achieved in all three categories. Without all the faculty and staff, student population, and school organizations, this award would have not been possible in the district.

“It meant a lot to celebrate the school academically and give praise to the students and teachers here,” said Student Council President Mariani Yu.