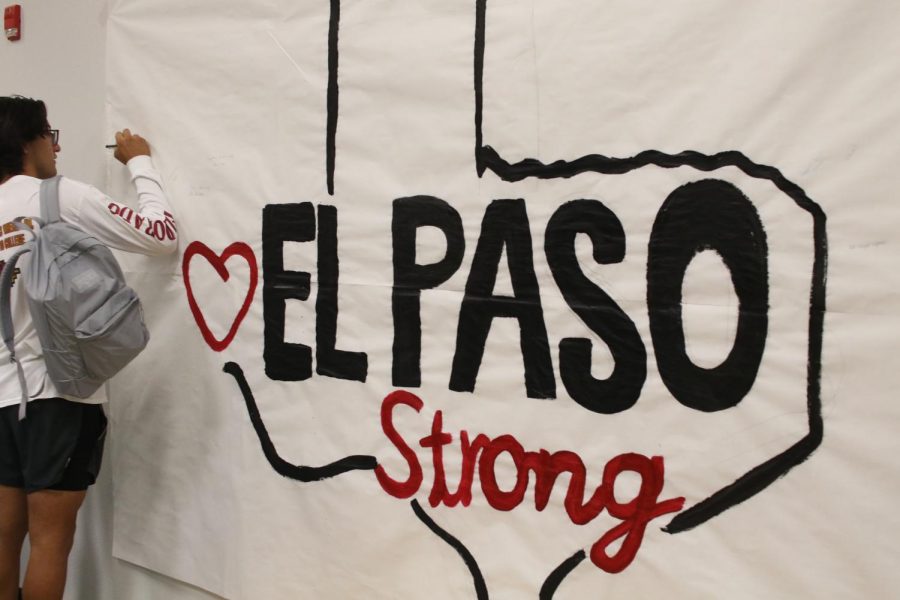 Students sign the memorial banner in the cafeteria on the second anniversary of the Aug. 3 Wal-Mart shooting.

Two years after Wal-Mart shooting, students gather to remember the 23 lives lost in first week back to school

Another year has passed after the Walmart shooting on Aug. 3, 2019 and students found different ways to remember and honor those lost in the shooting. From going to activities held by the city to attending memorial services, each student has found their own way to heal.

Surrounded by flashing lights and words of hope lining the walls, seniors Leeann Mclemore and Keidy Palma used art to heal after attending an exhibit of an interactive art piece at Socorro on July 31 by Laura Turon, who is part of Paradox Immersive Art. This art piece was called Tribute 23, displaying a bus with “AMOR” written on the outside in a colorful pattern. Inside the bus, visitors were allowed to go inside the exhibit and write words of hope on the walls using Sharpie markers.

“I had never seen an art exhibit like that, and I was completely mesmerized and in love with the message that it gave,” Palma said. “I loved seeing people create these beautiful collections of words and sharing them with the rest of El Paso. It made me feel at peace and free to be surrounded by such thoughtful messages of hope and love. There was truly no feeling like it.’

Surrounded by messages of hope and being able to share that love inspired Mclemore, making her realize the importance of art.

“Truly, reading the ‘Tribute 23’ messages was inspiring because I realized that we are all more similar than we think because of the common experiences we share, which makes me feel as if I’ll always have a place to call home,” Mclemore said. “I think art is a form of expression and we should utilize it to channel our pain and create something beautiful through it. So, in retrospect, we do heal through art.”

On Aug. 3, golden balloons dotted the sky after students stood outside the front of the school to honor the victims. Student council president Viviana Zambrano and other student council members set up this memorial since they were unable to do so the previous year during remote instruction. Orange ribbons were handed to represent anti-gun violence and principal Vanessa Betancourt gave a speech to students that morning.

“We released 23 balloons to honor all of the lives lost. The balloons signified peace for the souls of those who lost their lives,” Zambrano said. “The memorial healed people by giving us a way to be together as a community and show the foundation of our unity.”

Regardless of how Aztecs spent the day, it taught them a lesson that a community is stronger together. To showcase that, students such as senior Angel Espinoza were able to sign their name onto a poster that lined the walls of the cafeteria.

“It was really inspirational to see people giving back to the community and seeing what happened, you know?  And just respecting the lives lost,” Espinoza said.

Gallery|10 Photos
Photo by Brenden Malacara
Principal Venessa Betancourt speaks to students at the Aug. 3 memorial to remember the victims of the Wal-Mart shooting.